Our previous article was dedicated to collecting data on Facebook ad campaigns. Today we will analyze this data using Redash. As a first step, we need to upload our script to AWS cloud and create a server with AIOHTTP before passing the data to Redash. Let’s improve the script a little bit for this task:

Redash receives data in JSON format, which we haven’t covered yet. A JSON file is a file that consists of a list of dictionaries. The script will convert it to JSON and pass the data to Redash. We’ll need the variable that stores our access token, app id, app secret and two functions: wait_for_async_job() and get_insights(). The latter function receives account parameters and collects data on ad campaigns. Select the following fields: clicks, impressions, costs and dates.

We also need a AIOHTTP server that will return our output as JSON. Create a new file, import the AIOHTTP library and the get_json() function from the preceding script. Write a simple query handler: the script will receive data from Facebook asynchronously and our asynchronous handler function will sleep until all data is collected and transferred. The function uses json_response to transfer data in json format.

Initialize and run our application.

Run our file from the server. You can check whether it works by accessing it via server IP address specifying 0880 in the route field. Connect to Redash using URL and we’ll get the same table returned by our script:

Having query results, we can write the following query:

It returns this table, grouped by the date_start column:

We can now plot this data on the chart, let’s see if there is any correlation between ad costs and clicks: 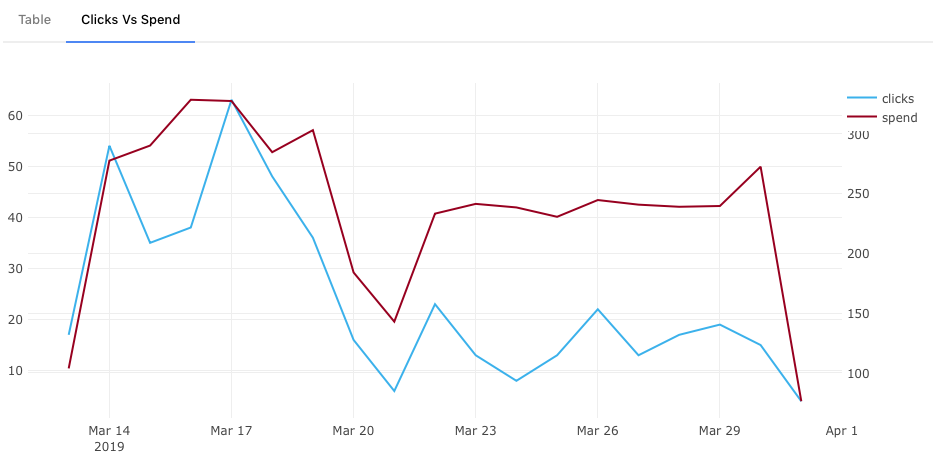 Bingo! Next time, we will show you how to get data on ad campaigns from Vkontakte.

Example of using dictionaries in Clickhouse with Untappd

Working with Materialized Views in Clickhouse